Like it or hate it, the belt system in Jiu-Jitsu has its advantages. When people get promoted properly, after achieving certain benchmarks, it makes a lot of sense. Belt buying incidents aside, a BJJ belt takes about 2 years on average. In those years the student is, probably, truly on the level the color indicates about halfway. Before that point, more maturity is needed, while after it the transition to the next level slowly begins. Every belt represents an important period in a grappler’s journey through BJJ, each with its own requirements. However, arguably, the purple belt is both the hardest the most fun of them all.

Despite some people thinking that the blue belt benchmark is the most important, I tend to disagree. Important as the transition from the white belt is, the blue belt is still considered the most likely period of quitting the art. Reaching purple, on the other hand, demonstrates resilience and true dedication to the art. Not unexpected, as it usually takes about 4-5 years of training to really reach the proper purple belt level.

The Road To Purple Belt

Although every school, or rather organization, has slightly different requirements regarding belts, in each one of them getting to purple belt requires hard work. When it comes to the requirements for someone to be promoted to purple belt, they are quite complex. 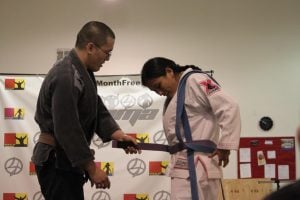 Receiving a blue belt marks one’s familiarity with Jiu Jitsu, the basic positions and moves. During the blue belt period, a practitioner starts to become aware of certain patterns of BJJ. For example, a kimura is not just a solitary move, as it can lead to armbars or the back. Even though moving between them is still difficult, the patterns are recognized for being there.

As a blue belt matures at that level, their game starts to change towards that of a purple belt’s. When an instructor sees an experienced blue belt roll with anticipation instead of aggression, they start to consider promotion. Replacing two or three move combos with more fluid movements that now connect dominant positions,  signify maturity in one’s game. As soon as a blue belt starts thinking more conceptually and less of moves, they’re ready for promotion.

At this level, personality traits, mat attitude as well as behavior outside of the gym start to matter. A purple belt isn’t promoted merely by the level of technical knowledge. Reaching the upper tiers of Jiu-Jitsu requires a degree of stability and dedication to the BJJ lifestyle.

A well-known quote in BJJ is that a purple belt knows all the techniques that a black belt does. The differences between the two are in the details. This actually describes this level really well. Purple is the time when a practitioner has the tools to start developing their own game. They have enough experience to know what works for them and should have an open mind for experimentation.

At the purple belt, movements become more important than just solitary moves. Stringing techniques together is a blue belt trait. Movement is fluid, smooth, and purposeful. Very little extra energy is spent when attacking or defending. The experience of a solid purple belt is very evident in their game. There is next to no panic defensively and purposeful aggression when a submission presents itself. It is not just the movement patterns that are fluid at this level, but so is the chaining of techniques. A purple belt doesn’t stop when something fails and should be able to recognize if and when they should go forward or return to a position.

Probably the most impressive ability of purple belts is their transitioning skills. They know more than enough to hold a position or attack submission. Despite not being aware of every little detail (brown and black belt level) they know how to get into a position. Or, out of one, for that matter. Seemingly effortless cat-like movement, while in total control, is a mark of a legit purple belt. Anticipation levels are very high in purple belts since they’ve spent countless hours on the mat. You know that mind-reading feeling you get when you roll with a black belt? Well, that gets developed mostly at purple belt, thanks to the experience and mindful rolling.

Purple belt is the period when a student of BJJ makes another huge transition. This is the time when they are introduced to teaching. Whether it is kids’ classes or fundamentals, purple belts start to give back to the community. The benefits of learning are plentiful for them.

A purple belt teaching a class gains valuable teaching experience before anything else. A teaching style is just as important as a rolling one. Not everyone wants or can be a teacher, but everyone should try it, just like the competition. Another important aspect is that purple belts get to refine their technique through teaching. Repeatedly demonstrating moves allows them to discover new details and opportunities. These nuances are hard to find during the stress of rolling or competition, so teaching allows purple belts to slowly start climbing towards the next level – the detail-orientated brown belt. 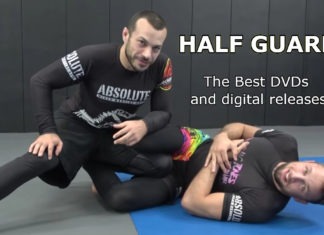