“Protecting And Generating Dynamic Offense From The Turtle”. It certainly sounds like a mouthful. If the previous Priit Mihkelson DVD instructional is anything to go by then this is actually normal. Well, normal when Priit is the man behind it. The enigmatic Estonian grappler hits us yet again with one of his trademark instructionals. This time, his focus is on the turtle position. Priit is notorious for his countering and evasion tactics and is one of the hardest people to hold down, let alone submit. His latest digital instructional focuses on one of the most defensive positions in Jiu-Jitsu, along with a detailed blueprint on how to turn things to your advantage.

ON SALE HERE:
Priit Mihkelson – Protecting And Generating Dynamic Offense From The Turtle

What this Priit Mihkelson DVD instructional essentially is, is the best offensively defensive turtle instructional in existence. What this DVD is not, is an instructional on how to stay turtled up for ages in order to deter attacks. it’s also not a turtle guard kind of instructional, where you go on the offense all the time. It falls somewhere in between, offering the best of both worlds, of course, spiced up by Priit’s own take on things. Given that he is a huge fan of principle based grappling, I was really looking forward to sifting through this one. Did it meet my expectations? Read on…

Priit Mihkelson is one of the nuttier grapplers of today. He is a Matt Thornton black belt (so that’s why he is so big on concepts and principles) and a representative of the always entertaining BJJ Globetrotters community. In fact, chances are that if you’re at any BJJ Globetrotters camp, you’ll most likely run into him. Actually, we have these camps to thank for bringing Priit and his unique way of teaching to our attention.

At currently 41 years of age, Priit isn’t necessarily the youngest grappler around. Instead of looking to exhaust himself daily, he takes a different route to ensure BJJ success. Mihkelson likes to be methodical, practical and embraces the underdog role, sort of speak. By this, I mean he does not mind getting into uncomfortable situations at all. In fact, he actually favors them and has turned such spots into his main offensive outlets. His take on grappling is truly unique and coupled with his brawling character and teaching style makes watching this (and any) Priit Mihkelson DVD instructional a real treat.

Priit’s game is based largely on being able to escape from anywhere. The way he approaches things is by first ensuring he is safe. So, even if you have him in a tight spot, like mount, for example, he’ll just adjust a little and nullify all your attacks. He then uses your attempts at attacking to escape and create unexpected openings for himself. Once he turns the tables on you, he stays in control until some brutal submission of some kind lands on you. Now, this guy offers you his complete turtle system, which, if you’re lucky, will make you just as effective as he is.

The trouble with Priit is that he is so entertaining when he talks, that you might lose focus on what he’s demonstrating. His live classes really are something else. However, having a Priit Mihkelson DVD instructional means you can look at things as much as you want. And believe me, you will want to rewind and watch things over and over again. Priit has so much information to offer and does it in such a manner that you’ll get an overload of information the first time you go through his instructional. However, the organization and systematization are flawless and it all makes lots of sense.

The “Protecting And Generating Dynamic Offense From The Turtle” DVD are divided into four volumes. The instructional begins with some key principles behind the turtle position, from a defensive aspect. Volume two builds on those by offering you different (and new) ways of staying safe in the turtle position. Volumes three and four focus a bit more on some unexpected offense, mostly by way of counterattacking. All in all, it is a turtle position game like we’ve never seen before.

As expected, and introduction is what opens the instructional. It is short, to the point and doesn’t waste a lot of time. Priit immediately gets down to business, addressing something most people think is irrelevant in the turtle – posture. This simple principle of specific posture is going to make turn your turtle into a real fortress. Top it up with the “turtle neck” and you’re literally safe from anything an opponent might throw at you.

This brings us to something that’s really the downfall of many grapplers in the turtle – elbow positioning. When opponents can’t get the neck, they’ll usually try to go for the legs, or open your arms. In the latter situation, your elbows determine if they’ll be successful. Priit has the silver bullet here, offering an elbow positioning system that takes care of every possible attack. Of course, Mihkelson does not forget about the legs. The final chapters take care of foot positioning and dealing with your opponent’s hooks.

The second volume of Priit Mihkelson DVD instructional moves on to some hardcore turtle defense. In that sense, Priit offers something that’s really important and has not been covered so far – dealing with Truck entries. The turtle is one of the best spots to enter the Truck, which is a position nobody wants to be in. Priit’s solution is for sure going to make even Eddie Bravo think before going for a truck entry again.

The other major problem is the seatbelt, or as Mihkelson calls it, the harness. Well, there’s a solution for that as well, or rather a few organized in a systematic sequence. The standout form this volume, for me at least, was the clock choke defense. It is a unique way of stopping one of the tightest turtle submissions ever.
Further along in this volume, Priit moves to explain defense against specific positions and attacks. Namely, he shares his take on how you can use the turtle to prevent the opponent from passing with different passes. With this, he previews what’s to come in the following two volumes that tackle turtle offense.

Time to switch thing up a bit. However, manage expectations first. As I said, this is not an all-out attack kind of instructional. Instead, it’s a blueprint on turning the tables on your opponent as they attack the turtle. An advanced concept, yes, but a fairly simple way of using it, thanks to Priit.

First up, a strategy on dealing with wrestlers. Unlike BJJ people, wrestlers like to tilt people in turtle and get their back to the ground. Not anymore, as Priit has figured out the ultimate solution. From there on it is a bonanza of counter-attacks. Whatever you might think of doing to a turtled opponent, Priit has thought of too. D’arce choke, Anaconda, Guillotine, Crucifix, shin hooks… There are crazy, effective and often brutal counter-attacks available to deal with all of these and many more.

The very final part of the “Protecting And Generating Dynamic Offense From The Turtle” Priit Mihkelson DVD instructional goes on to explore the crazier aspects of Priit’s turtle game. Counters here are going to frustrate your opponents like nothing else. After watching this instructional, nobody is going to be able to pull your hip down to the mats, or sink in a seatbelt and/or hooks for a back take.

What you also get in this portion of the instructional are spinning escapes. not that they’re spinning as opposed to rolling escapes, so no need to be overly flexible or mobile. There is also a very useful way of pulling guard form the turtle as well as standing up completely despite your opponent’s best efforts. Crazy effective and completely unexpected.

What can we say except thank you Priit Mihkelson! Nobody likes getting stuck in turtle, only to eventually end up in a bad position. The “Protecting And Generating Dynamic Offense From The Turtle” Priit Mihkelson DVD instructional offers a complete system on dealing with anyone from the turtle. The best thing about it is that you can just stay there completely safe until you decide to counter and turn the match to your advantage.

ON SALE HERE:
Priit Mihkelson – Protecting And Generating Dynamic Offense From The Turtle 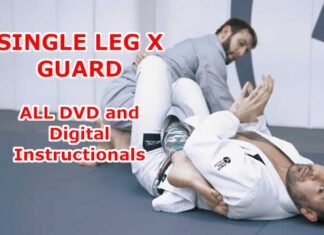 BJJ World - 0
What is the most popular and effective open guard variation that you can play these days? If your answer has anything to do with...