Brazilian Jiu-Jitsu is an art that demands a lot from one’s body. As with all competitive sports, Jiu-Jitsu requires practitioners to be in good physical shape. Likewise, good body awareness and coordination are essential in order to grasp the complex techniques of the sport. Unlike most sports though, the requirements of BJJ go further than the physical. As Joe Rogan once put it, “BJJ is complex problem solving under extreme stress”. The BJJ mental attitude is just as important as the physical component. Actually, at the highest level, it might even be more important.

Jiu-Jitsu presents people with more than just a physical challenge. The nature of the art is such that it requires practitioners to be mentally engaged at all times. Mental mistakes often cost more than physical ones. Furthermore, the BJJ mental attitude of the practitioners evolves along with their technical knowledge. A black belt has a completely different mindset than a blue belt, for example. Such is the complexity of Jiu-Jitsu that both the mind and the body get a workout. No wonder it is referred to as “The game of human chess”.

In BJJ the ranking system outlines more than technical knowledge. It doesn’t matter what number of moves you know, or how efficient you are in rolling and competition. You won’t progress through the BJJ belt system. The correct attitude of students is fundamental to an instructor’s decision to promote. It is not just general attitude on and off the mat that matters. The mental attitude of a student is also subject to grading. Not only that, but it is expected to evolve and mature along with the technical knowledge.

Along the belts, students get exposed to situations of different physical and mental difficulty. At white belt, it is crucial to guide the new student towards the right direction. The mind of a white belt is a “Blank Slate” in BJJ terms, and needs to be carefully guided towards correct conclusions. Later on, more complex responsibilities come along with maturity in the art. As the experience grows, so does the mindset. And much like the enormous changes in technical abilities, the BJJ mental attitude changes entirely during the Jiu-Jitsu journey of students. 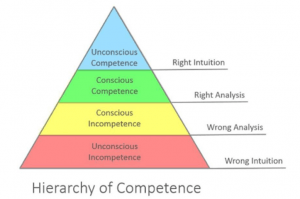 White Belt – Wrong Even In Intuition

The mental attitude of a white belt is like that of a first grader. It is all about gathering as much info on the workings of the art as possible. This is the time to learn the BJJ alphabet. It’s not yet the time to form sentences, but to learn how the letters look and how they are organized. Of course, by letters, I mean techniques and moves.

During this phase, most of the cognitive focus is placed on the technical aspect of BJJ. Learning the basics of the art requires the careful guidance of instructors and the help of more experienced training partners. As with all things new, the beginning phase of BJJ is the toughest one both physically and mentally.

A white belt has to come to terms with the fact that they can’t learn everything by the time they get to blue belt. There’ll be a lot left to discover, later on, so try to focus on the very basics. You won’t understand much, but don’t let that worry you. Rolling is notoriously difficult during this time and this is reflected in the mental attitude. Just make sure you learn the letters and survive, and you’re on the right mental track.

As your experience grows and your knowledge of technique increases, so does your mind. Your mental game should develop and evolve along with your technical game.

At blue belt, you have more tools than at white. Now you know the alphabet and can try to formulate words. Keep in mind that sentences are still somewhat far away. A blue belt usually has one or more favorite moves that are the centerpiece of their game. However, as much as you think you’ve got these moves down, the truth is – you don’t. Huge gaps still exist in your technical game, and your inability to recognize them demonstrates that your mental attitude is on the same level.

Despite increased knowledge and understanding, blue belts still make fundamental mistakes. In a mental attitude context, they lack the information to successfully put things together. This leads to inconsistent performances and can result in developing erroneous habits. It is important for instructors to be aware of the lack of cohesion in a blue belt’s game, and lead them accordingly.

Inconsistent performances hugely affect self-confidence. The most important point to take away is that this is normal and expected. Recognizing the limits of your abilities is a step towards the right direction.

You are now fully consciously incompetent.

A purple belt is now fully equipped to put together strong sentences. Their BJJ mental attitude is one of clarity. This is the first period when BJJ starts to make sense.

Technically speaking, your game goes beyond just moves now. Weight distribution, utilization of angles and a more conceptual approach come into the spotlight. Attacks are now more complex with a view towards anticipation of the opponent’s reactions. A huge aspect of a purple belts game is fighting from the bottom.

A purple belt’s most characteristic mark is fluidity. Movement is continuous as a result of a clear mindset. During this period, students know what they’re doing, but more importantly, when to do it. Timing is a huge accomplishment for any student, and a purple belt is when most succeed in achieving it. The main goal of a  purple belt is smooth movement and execution of techniques while being completely aware of what is happening.

On a personal level, purple belt is the most defining period in a student’s game. As your technical game takes shape, so does your mental one. Congratulation, you are now in the conscious competence phase. 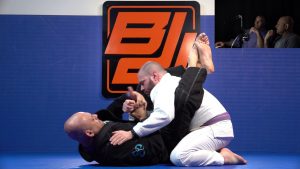 Efficiency best describes the brown belt. Now you can write complex essays with apparent ease. You may pick up a move just by seeing it. PIcking the move up is done both physically and mentally. It is not just your body that can learn fast at this point – your mind does too. This connection allows for the successful integration of a new move in a brown belts game.

You can now not only learn a new move quickly but see all the follow-up possibilities that might stem from it. This gives your abilities the take place before your complete comprehension of a situation. That is why brown belts seem to easily shrug off most counters and/or defenses of their opponents. Consistency is key at brown belt and tapping out is scarce. Just don’t let this get you off the tracks when it inevitably happens. After all, you’re not fully mature just yet.

As far as BJJ mental attitude goes, you have become unconsciously competent. Almost there!

Talk about as close to perfection as possible. Complete awareness is best suited to describe a black belt’s abilities. Of course, we’re talking about both mental and physical abilities. Now you don’t just know, you can think in a way that allows you to modify and/or create new moves or techniques.

This ability is not limited to techniques though. it is not a coincidence that most game-changing philosophies of Jiu-Jitsu come from longtime black belts. Purple and brown belts can also invent or modify moves, but they can’t get the whole picture. A black belt has the ability to completely improve a whole part of the art, giving inspiration to others to do the same.

It is as easy as being happy. A black belt does BJJ for the love of it. Although someone can fall in love with Jiu-Jitsu from the start, the understanding only comes with the black belt. And understanding is a sign of maturity. You are now on top of the BJJ mental attitude hierarchy pyramid. 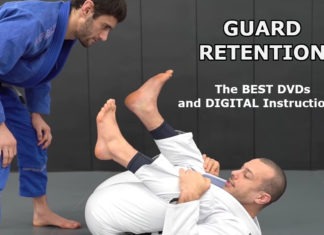 BJJ World - April 7, 2021 0
One of the most underrated, yet essential skills of Brazilian Jiu-Jitsu has to be guard retention. What is the point of trying to attack...