Bia Mesquita is one of the most exciting female grapples of today,. With plenty of titles behind her, and some crazy performances on the mats. She is also a real wizard in both Gi and NO-Gi, and she is just getting started. AN avid competitor that’s competing as much as possible, she doesn’t seem to have a lot of time left for instructional. However, probably due to the Covid-19 pandemic, it seems Bia has turned finally managed to share some of her World Championship Open Guard secrets. It was about time we saw a high-level Bia Mesquita DVD, and we have the first review!

An open guard is a subject that has been beaten to death. To be honest, it is hard to pick an open guard BJJ DVD, given the sheer number of open guards people like to play. So, when in doubt, it is always smart to look in the direction of someone who has a proven open guard system that is not overly complicated. Bia Mesquita fits this description to a “T”. Her World Championship Open Guard System instructional delivers just that and is the Bia Mesquita DVD we’ve all been waiting for.

The Toughest Female Grappler Of Today?

That is quite the claim, I know, but Bia has definitely made a name for herself as a tough grappler that doesn’t give up in Jiu-Jitsu circuits. After all, she did get caught in a very nasty armlock by Ffion Davies in the early rounds of ADCC 2019 and didn’t tap, ending up with a broken arm instead. Tough as nails! 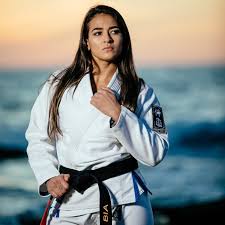 Bia already has 6 Gi world titles, 1 No-Gi World title, and 1 ADCC title to her name at the age of 29. While she is looking towards MMA (understandably) she still has a lot to offer to the BJJ world, be it in the form of instructionals or matches. Bia also has a bunch of other titles, ranging from the Pans and Europeans, through the Abu Dhabi pro all the way to winning the EBI in 2016.

Currently fighting under the Gracie Humaiata banner, Mesquita is extremely well known for her guard game. While her closed guard is pretty formidable, her open guard game is out of this world. Bia started with BJJ early, then switched to Judo, before eventually giving swimming a try. She excelled in all of them, earning national championships with ease. She went back to BJJ later on, under the tutelage of Leticia Ribeiro, who awarded her the black belt in 2011. 9 years later, we finally get to see a Bia Mesquita DVD in the form of her World Championship Open guard System, for Gi Jiu-Jitsu.

Bia is famous for her guard game. She has one of the most versatile systems of relentless attacking from the bottom that you’ll ever see in BJJ. It is not just about having an open guard that nobody can pass. Bia’s guard is all about attacking, and nobody can find a way past it. After all, the offense is the best defense, isn’t it? Plus, you won’t find as many people that are as well versed in the No-Gi aspects of the guard as they are with the Gi.

The reason Bia has won so many championships with her guard is that she is able to blend her attacks together. She does not use just one open guard variation, but rather likes to switch, focusing more on the sweeps and submission combinations rather than the guard itself. Whether it is X guard, shin-to-shin, or spider guard it does not matter as you’ll see in the World Championship Open guard Bia Mesquite DVD.

What can you expect to get from this Bia Mesquita DVD? First of all, know that it is a Gi instructional (a NO-Gi version of the same system is coming soon). the DVD has four volumes, just as you would expect from a BJJ DVD instructional nowadays. There’s no real distinction style-wise to what Bia shows, but there is a progression from simpler stuff, towards a volume filled with nothing but crazy open guard combo attacks.

In the first volume Bia starts with an introduction to the open guard in general, and her World Championship Open Guard System. She has a slightly different take on guard, compared to most people, which has a lot to do with her aggressiveness as a fighter. It is also a way of playing open guard that we need to see more in JIu-Jitsu. 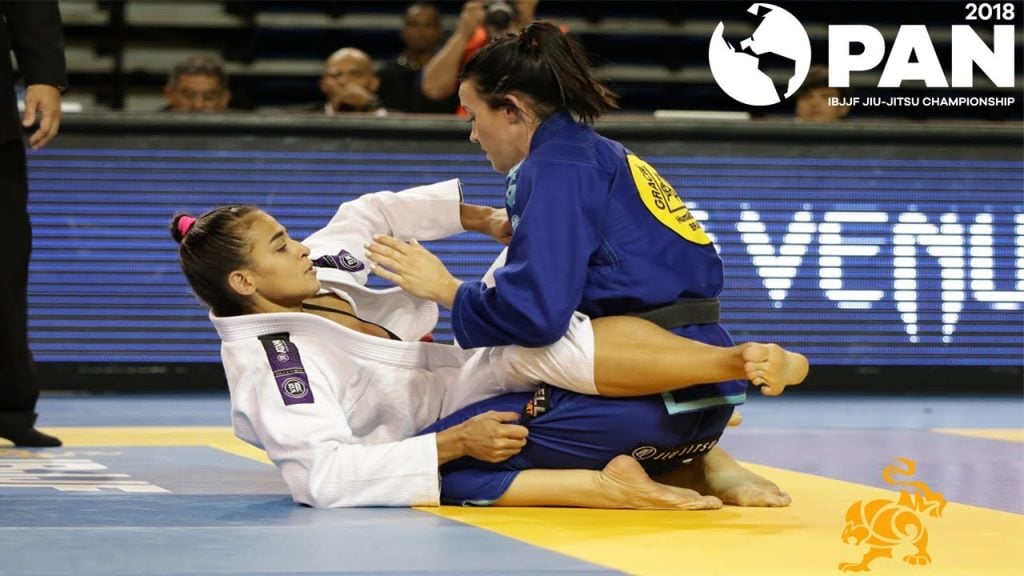 The first volume is all about sweeps. There’s an interesting combination of sweeps in here, called the triple sweep that Mesquita likes to use. As you’ll see in the DVD, she doesn’t just do single attacks but rather joins them together in mini-systems that work like a charm. There are three variations of the triple sweep in this volume, meaning you’ll learn more than enough to get people on the ground.

Part two goes a bit deeper into the technical aspects of open guards. The focus here is the X guard, and all of the ways you can use it to set up attacks, like the aforementioned triple sweeps. Bia doesn’t spend too much time on how to stay in the X guard, because she doesn’t stay long in guards anyway. Instead, she offers a few entry options, followed by attacks, attacks, and more attacks.

Those attacks include sweeps in different directions, one going forward, and another one taking the opponent backward. Combining them all but guarantees you’ll get them to the ground. Wrapping up is a very neat triangle setup that was completely new to me when I was watching this Bia Mesquita DVD for the first time. Currently, I’m itching to give it a try on the mats.

This is arguably the most interesting part of the World Championship Open Guard System Bia Mesquita DVD, or at least it was for me. Here, Bia goes into advanced Jiu-Jitsu, demonstrating how you can use open guards to set up takedowns from the knees/bottom that work as sweeps. In other words, she’ll teach you how to sweep with single leg takedowns, ankle picks, and the likes. She uses the shin to shin guard predominantly in this volume and offers, even more, sweeps, particularly going overhead.

It wouldn’t be a complete Bia Mesquita DVD volume If there wasn’t a submission somewhere in it, so a really cool armbar finish off of the overhead shin-to-shin sweep wraps this penultimate volume up. 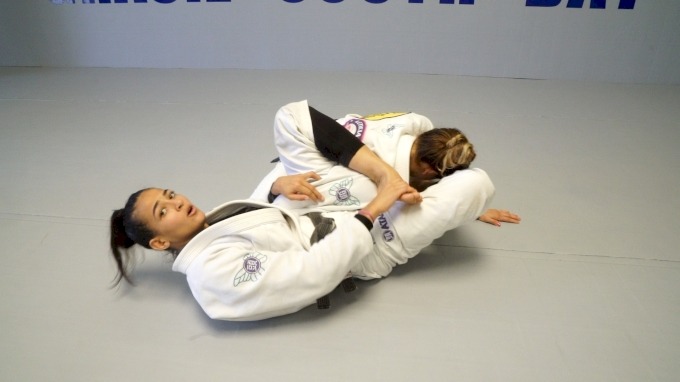 Finally, a bunch of crazy combo attacks from open guards that will provide competitors with a goldmine of ideas. Bia really shares some amazing stuff here, starting with the chiropractic triangle choke which has to be the best-named move on this entire instructional. Next up are combinations to use when an opponent is on their knees, ending up with a neat little armlock. Triangles, armbars, and a front armbar follow suit, al focusing on breaking down, and tapping kneeling opponents. In combination with the X and shin-to-shin guards options before, this gives you a complete system to deal with people trying to pass your guard from any level.

The World Championship Open Guard Bia Mesquita DVD is just what the doctor ordered to freshen up the open guard game. In a world of stalling guards and systems that focus on not getting passed, it is a real breath of fresh air to see a system that is focused on nothing but aggressive attacks. There’s something for people of all belt levels and experience in this one, and it does come to work as a complete system once you get through all four volumes of the instructional. 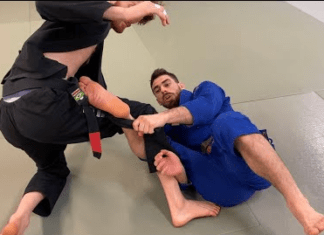 BJJ World - 0
How do lapel guards in BJJ work? What do Keenan and all the others that love his stuff do when they set up those...