Brazilian Jiu-JItsu offers so many options to control and attack an opponent that you’ll never find training boring. To that extent, not many other martial arts are as versed a using anything and everything to gain an advantage. What’s more impressive is that it is all legal and free to use in competition as well as in training. To make things clear, this doesn’t mean you can use nearby objects or the likes. However, you can use everything on your opponent’s body or yours to get a tap. Among other things, that includes the Gi. since the Gi consists of pants, a jacket, and a belt, that gives you lots of weapons to use at your disposal. Out of those, the lapels are most often the first choice for most. In the spirit of the modern BJJ game, let’s explore some of the best Jiu-Jitsu lapel attacks you can use.

BJJ is the game of control that leads to submission. That’s an oversimplified way of putting it, but a correct one nonetheless. Well, you can hardly get any more control than by placing a rope around an opponent’s body. When that rope is connected to their body, to begin with, control gets an entirely different meaning. Not to mention the tightness you can achieve at submissions, without any risk of slippage. I can’t pinpoint the exact moment in time that people started using the Gi to attack rather than only control. However, whoever was the first one to grab a lapel and use it as a weapon, they changed the Gi BJJ game forever. Some of the best JIu-Jitsu attacks of today are based on using the lapels and/or collars and even top-level black belts have trouble dealing with them.

As more and more people get into BJJ, it starts evolving faster and wider than ever. The sheer number of possibilities from every position is a clear testament to this. Whenever you find yourself, regardless if it is Gi or No-Gi JIu-JItsu, you have the ability to attack and defend, as well as transitions In between positions. This makes training as much fun as it is, but it also keeps the art on top compared to other martial arts. 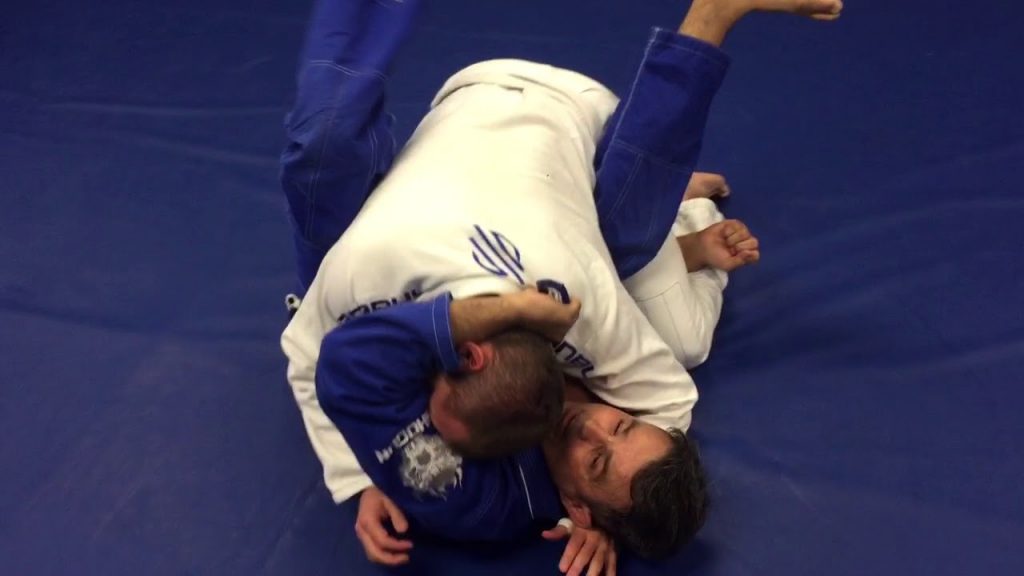 One of the areas that BJJ is highly unique about, in a slightly unusual way, is the Gi game. In the beginning, sleeve and collar grips and pants grips to an extent had the sole goal of providing control over an opponent. If you look at the original Gracie Jiu-Jitsu, most submissions do not rely on the Gi whatsoever. Kimuras, Americanas, Rear Naked Chokes, Armbars, etc are all submissions that do not require Gi grips. However, as the Gracies discovered, the anchor points you grip onto a Gi, actually provide much better leverage compared to No-Gi. From there on, it was open season to finding new and exciting ways of turning the Gi into a weapon.

Today, we do not only see innovative ways of gripping and even braking the grips, but also ways of entangling opponents until they’re powerless to resist. Whether it is a guard position, a submission, or a way to maintain top position, the Gi is a huge part of the modern BJJ game. To that extent, the best Jiu-JItsu fighters of today use pretty much e every part of the Gi, form the belt all the way to the rims of the pants. And it opens up so many options it is scary. Especially when you realize that this is just the beginning…

Playing With The Lapels

There’s an undeniable advantage to playing a lapel based JIu-Jitsu game as opposed toa more traditional one. The lapels offer a huge advantage, as they work as extensions of your levers or frames. AS such, you can attack with them, control with them, or even use lapels to defend yourself. Moreover, you’re not limited to only one set of them. On the contrary, you’re free to use both yours and your opponent’s lapels in any combination imaginable.

Whether you use your own, or your opponent’s lapels usually depends on what position you’re in. Some of the best JIu-Jitsu black belts of today are notorious for playing lapel guards, for example. In those cases, using the opponent’s own lapel can help prevent any passing options they might be considering. In fact, getting caught up in any of the modern lapel guards pretty much guarantees you can’t pass unless you completely destroy the guard. And, given how easy it is to firmly grip and hold a lapel, that is a whole different puzzle to solve. At the same time, the person attacking with the lapels can work toward sweeping or submitting.

This example only covers a small aspect of playing lapel guards. However, when ti comps to using lapels you can use them from virtually any position imaginable. You can pass with the help of lapels, attack the turtle, hunt for side control submissio0ns ore ven chokes form the back. There’s no real limit to how you can use them to gain a huge advantage. 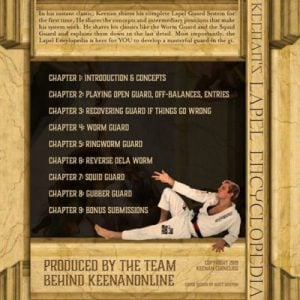 Just take a look at Keenan Cornelius. He has the best Jiu-Jitsu lapel game in the sport. In fact, he has an entire “Lapel Encyclopedia” DVD set, exploring all the options he has come up with so far. Be sure to check this 10-part instructional review out!

Some Of The Best Jiu-Jitsu Lapel Attacks

It is pretty much impossible to cover all lapel attacks Jiu-Jitsu has to offer. In fact, even covering only high percentage one,s this would turn into an e-book rather than an article. So, in order to keep things short and sweet, we chose the best Jiu-Jitsu lapel attacks that are proven to work at the highest levels. This has the aim of acting as an introduction to the attacking lapel game for those that haven’t explored it yet. Moreover, it serves as a shortcut to the most high-percentage moves for those that are already deep into the world of BJJ lapel attacks.

If there’s one spot where you can hunt for lapel attacks, it has to be top side control. The thing is, there are several really high percentage attacks from here that’ll pretty much guarantee a submission. The Brabo choke, Lapel paper cutter, Lapel Ezekiel are just a few examples. However, the most potent one has to be the Samurai choke, which is our choice for today. For the samurai choke, you use the far side lapel of your opponent as your main weapon. The idea is to place it over their arm so that you can grip it like you would a baseball bat. A simple rotation of your body will bring your forearms together for one of the tightest chokes in JIu-Jitsu.

Where do I even start wit sweeps using lapels? Just about any of the lapel guards will do here, as people often give sweeps away just to get out of the lapel traps. Keenan’s squid guard is one of the best examples of unstoppable and effortless open guard sweeping using a lapel. Form an open guard you want one lapel around your leg, and then the thigh of your opponent. This will ensure the opponent can’t pass while making sweeping as easy as pushing them backward.

Submitting somebody from the guard is also possible with lapels. In fact, some of the best Jiu-Jitsu submissions work by utilizing lapels to make things more secure. In those terms, you can hunt for pretty much any submission with a lapel variation. One submission that benefits massively though, is the triangle choke. From a closed guard, you want the lapel on one side behind the back of your opponent, and going across to their opposite side shoulder. From there, as you try to sneak a leg in for the triangle, you can use a foot inside the lapel to lift the opponent up and create space.

The Gerbi Choke is actually one of the lapel chokes you do with your own lapel. It is one that stems from Judo but is tailor-made for BJJ. It works against the turtle position when you’re in a front headlock. The goal is to release one of your lapels and wrap it around the opponent’s neck. From there on, you proceed to execute a Peruvian necktie, only gripping the lapel rather than your own arm. The Gerbi Choke is much tighter since the lapel makes it impossible for an opponent to scape.

Before we wrap things up, let’s look at one more of the best JIu-JItsu lapel attacks of today. That is the Chilean necktie, an ultra-tight lapel choke done from back control. Form seatbelt position you simply add a lapel under the arm to enforce your seatbelt grip. The lapel you use is your own. The goal is to pass the lapel upwards, so that you grip it with your opposite hand, right at the level of the neck. In order to finish, you need to go on your side and swing a leg over the opponent’s head, pushing their neck towards the lapel with your leg. Ultra effective and most often, unexpected.

Using lapels is a surefire way of making sure you expend less energy and increase the effectiveness of your attacks. The best part about it is that you do not have to be advanced to accomplish this. In fact, the best Jiu-Jitsu lapel attacks work fro grapplers of all levels. Furthermore, they make their attacks feel like those of seasoned grapplers with decades of experience. Give them a shot. After all, what have you got to lose?

Worm Guard – The Evolution Of BJJ’s Most Annoying Guard

Draculino – Lapel Choke from Half Guard 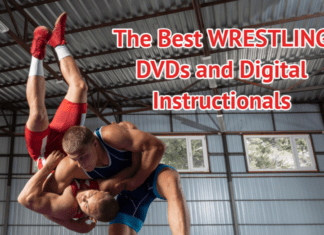 BJJ World - March 10, 2021 0
Wrestling is one of the oldest forms of the competitive battle for humans that allows for real exchanges without the potential for damage. This...